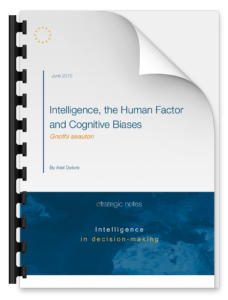 This Strategic Note originates from the work conducted in the FP7 RECOBIA project as well as an article published by Axel Dyèvre in the January 2015 issue of the French magazine “Revue de la Défense Nationale”. The original version of this note was published in French in June 2015. It presents the key findings of the project:

– 7 Key intelligence tasks (KITs) which are elementary acts performed by any Intelligence Officers. These KITS are at the core of the cognitive goals of Intelligence Officers; that is regardless of their position or role, or if they work in an office or in the field. These seven stages are not linear.

– Techniques to mitigate the effects of these cognitive biases

CEIS coordinated the RECOBIA (Reduction of Cognitive Biases in Intelligence Analysis) research project from 2012 to 2015. This project was co-funded by the European Union through the 7th Framework Programme (grant agreement n° FP7- SEC-2011-285010). The objective of the project was to improve the quality of intelligence production by reducing the negative impact of cognitive biases on the work of Intelligence Officers. The CEIS team worked closely with Dr Alain Bertone. Dr Bertone has a PhD in experimental psychology and has co-authored the book “Témoin sous influence: recherche de psychologie sociale et cognitive” (1995, PUG).

The other consortium partners of the project were: the EUROSINT Forum (BE), The Commissariat à l’Energie Atomique et aux Energies alternatives (FR), Hawk Associates (UK), Thales (FR), Atos (ES), Zanasi & Partners (IT), The University of Konstanz (DE), and Graz University of Technology (AT).

In order to take into account operational realities and requirements, 6 two-days workshops were organised throughout the three-year duration of the project. These workshops attracted more than 102 representatives of 21 intelligence agencies from 11 EU Member States and 4 European agencies.